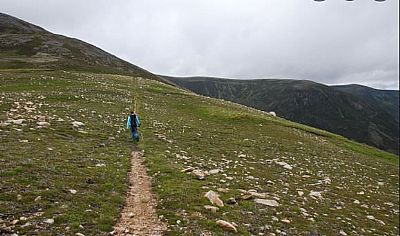 The 1:25000 OS map shows two zigzag paths NW of Glencarron Lodge, ascending to the plateau rim (only the western appears on the 1:50000).

We will ascend the western into Coire Dubh-riabhach, a steady, well-graded climb of 350 m.  The going across the footslopes is a little rough and possibly wet, with a couple of slightly awkward bits where there has been some stream erosion.  Once on the hillside proper (steep but not scary - a vertigo sufferer assures you), the path is mostly a delight to follow.  We then follow the rim, which is rough grass with some peat hags, for only 250 m, descend open slopes, and pick up the eastern path, straightforward, with some more ‘bog-trotting’ at the foot.

We will have all day to go about 3 km, and will take it nice and slowly.  There may also be some wildlife interest...

Everyone knows what a stalker’s path is, but there is no book on them, and almost nothing anywhere about their making and their use, or about their place in social and landscape history.

Before the deer forest era, there were no made paths in the mountain areas.  From most of the new Lodges, networks of hand-built paths ramified.  Some were basic, others well-designed and beautifully crafted.  Many have vanished from disuse or erosion, or been lost to ‘upgrading’.  A small minority survive in ‘classic’ condition.

Within a study area extending from Glen Carron south to Loch Mullardoch, and the width of the mountains, 85 stalker paths and branches extend for over 250 km.  A few rise to elevations over 800 m, but most are relatively short and confined to side glens, corries and outer shoulders.  The transformation they brought about in ease of access to formerly ‘remote wild areas’ is evident.  Flights of zigzags may be emblematic, but only eight paths have more than 10 zigzags.  About 20 of the 85 retain significant pristine elements.

Glencarron and the formerly-associated Achnashellach Estates created one of the finest path networks in the Highlands, extending into the Monar mountains and also north into the Coulin group. The two short examples visited today are attractive and instructive tasters for greater glories further inland. They also raise interesting questions as to path purposes.

Due to the present Covid regulations the numbers will be limited to 15 including me so please let me know as soon as possible if you would like to come along - and if you then need to cancel, there may be a waiting list. Email me at: david.jarman914@virgin.net

If there is sufficient interest this walk could be repeated later in the year. There will be further walks advertised soon.