The walk will focus on the maritime remains along the north shore of this beautiful bay. The old  harbour at the eastern end serviced the boats that took stone from the quarry at the back across the Moray Firth, to build Fort George. There are remains of about six boats rotting in the silted waters of the harbour.

The quarry at the back is interesting in itself - a vast amphitheatre of exposed rock.

Further west the remains of the Avoch herring fishing fleet 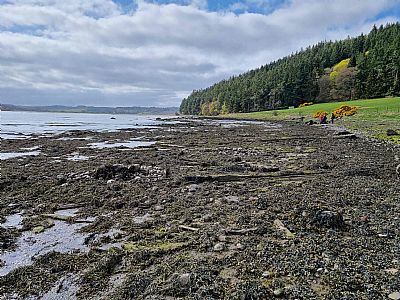 from the early 20th century - probably Zulus - has just been discovered. Or, more accurately, surfaced into the world of national archaeological recording. Local people knew it was there all along!