A Year of Highland Archaeology

In August 2019 we proudly announced the publication of A Year of Highland Archaeology: A Collection of the Projects and Activities of the North of Scotland Archaeological Society. This book includes 10 articles which explore some of the diverse and important recent projects that NOSAS has been involved with in the Highlands.

These include the lottery funded Tarradale Through Time Project, which recently saw 6000 year old antler tools uncovered near Muir of Ord on the Black Isle.  These very rare finds included the remains of a harpoon point and two "T axes" left behind by hunter gatherers on the shores of the Beauly Firth. A further two week excavation at Tarradale, focusing on a barrow cemetery of potentially national importance, is set to commence later this month.

Another chapter focuses on Torvean Fort; a neglected structure in Inverness, perhaps constructed more than 2000 years ago, which is today under threat from persistent trail bike damage. Another tells the story of how a collection of 400 historic maps relating to the Lovat Highland Estates, covering extensive areas west of Inverness, have now been scanned and made available online. A further chapter focuses on the society's work with Scotland's Rock Art Project which aims to log as many as possible of the mysterious carved “cup marks” which appear on Scotland's boulders and rock faces. The precise date of these carvings, of which there are many good examples in the Highlands, is unknown but they are thought to have been mainly created in the Neolithic period around 6,000 to 4,000 years ago. Other archaeological locations explored in the book include Ormond Castle in Avoch, prehistoric roundhouses in Glen Urquhart and Gruinard Island in Wester Ross.

The North of Scotland Archaeological Society, which recently celebrated its 20th anniversary, was established by a group of amateur and professional archaeologists keen “to further the study of Highland archaeology and to promote that interest to a wider audience”. This publication is an account of some of their recent activities - some undertaken using long established methods of survey and others, more hi-tech in nature, involving the use of drone photography, LIDAR data and computer generated 3D models.

The editorial team is Jonie Guest, Meryl Marshall, James McComas and Roland Spencer-Jones. You can find out more in our blog post.

The full colour 100 page paperback can be bought directly by Paypal (below) for the reduced price of £7.00 inc. UK p & p. It is also available on Amazon, through Bassman Books, by email enquiry and in local bookshops. ISBN 9780995644038. 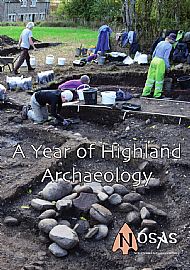