Anyone wanting to take part in this project , please contact the project lead: Richard Guest guestcharles1@gmail.com 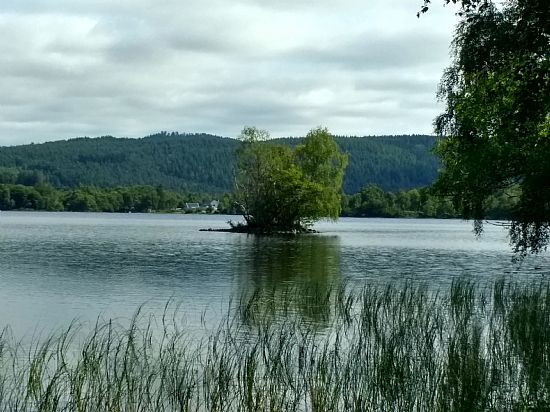 The project aim is to build up a database of the location of crannogs in the Highlands and to investigate a select few in greater detail.  Canmore records 83 Highland crannogs but it is likely there are many more.  For instance, only five are listed in the whole of Ross and Cromarty.

For the purpose of this exercise, we are defining crannogs as small islands in freshwater lochs which are entirely or partially man-made.  There is no maximum or minimum size but as a general rule, think of a big hut circle surrounded by water.  The area of dry land may have increased or decreased over time, due to changes in water levels and erosion.  They are typically circular or ovoid and consist of a pile of rocks of fairly uniform size, no bigger than a two-man lift.  There has been very little investigation since antiquarian times.

As usual NOSAS members have been enthusiastic in their support and generous with their time in getting this project of the ground, for which many thanks.

A training session was held on Tuesday 28 September at the Muir Hub. This demonstrated the use of Pastmap , Bing Aerial and lidar imagery.  Since then, volunteers have been busy with phase 1 of the project, studying the 100km OS grid square “NH”.  They have virtually completed the study of this area, identifying over 130 potential crannogs and huge thanks are due to them for their many hours of study.

The steering group has sorted the data and pulled out a list of the crannogs graded 4 or 5 for likelihood on the identification form.  This gave a long list of 36 sites.  The group went through these sites at a Zoom meeting, studying the maps and satellite images and eliminated some of them – mostly because they appeared to be recent constructions not recorded on early maps.  This left us with a list of 14 sites to examine on the ground.  Only five of these sites are completely unrecorded, the rest are in Canmore and 3 are scheduled but are thought worthy of a closer look.

The crannog recording form and notes for guidance have been revised in the light of experience. Click on the hyperlinks to see these.

We are now ready to expand the search area by moving west into Wester Ross and south into Lochaber and volunteers are now sought for this second phase.  A web map is now available, using OS open data, which will help to identify areas of open water in which crannogs may be found.  Whilst the larger lochs are obvious it can be difficult to ensure that you have checked all the smaller lochans in an area just by visual search so this tool should help.

Another desktop task is to thoroughly examine the Canmore and HER records, going back to the source data for the chosen sites, to establish just how much true archaeological data there is about them and how much is speculation or simply handed down from antiquarian times without scientific checking.

A small amount of field work has been undertaken by the steering group, mainly to check the accessibility of sites for further study and the practicality of using canoes to transport divers or snorkellers.

One site, Loch nam Faoileag (just west of the Culnakirk road near Garbeg) has already been eliminated; what looked promising on satellite images has been established as purely natural.  Possibly a good thing because the access was pathless and hard going.

Loch Ruthven (two scheduled sites and a third possibility) and Loch Knockie (one recorded and two unrecorded sites) have been chosen for a site visit on Saturday 26th February. See the What's On section of the website for details. These sites are a short drive apart to the south of Loch Ness, with a fairly short walk to each. This will be a look from shore, to have a look at a good example of a known crannog and compare it with what can be seen at the unrecorded sites.  There is other interesting archaeology in the area.  Numbers may have to be limited due to parking constraints and car sharing is encouraged subject to Covid guidance at the time.

Loch Lundie near Invergarry will be the subject of a visit at a date to be confirmed in March. This is a longer walk, on a good track and again there are plenty of other interesting features in the area.

Two members of the Nautical Archaeological Society have volunteered assistance when we start to get wet.

The RSPB are being consulted on the sensitivity of the sites to disturbance of breeding birds and when we get their feedback it is hoped to set some dates for on – and under- water exploration.