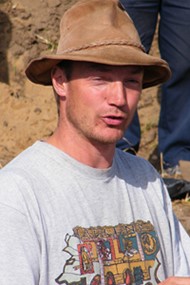 an collections at the National Museums of Scotland, and one of Scotland's leading archaeologists.

He is principal curator of Iron Age and Roman collections. His undergraduate degree and PhD are both from Bradford University, and he has worked at the National Museum since 1991.

A key strand has been excavation work, both his own and using the results of others through the department’s post-excavation service. A vital element has been following up Treasure Trove discoveries in the field to provide a context for “stray finds”, as at Birnie (Moray) following a scatter of Roman coins, and at Blair Drummond, the findspot of an Iron Age gold torc hoard.

Many NOSAS members have met and worked with Fraser on several of his digs in Moray and Inverness – Belladrum, Birnie, Clarkly Hill.