The project to digitise the map archive of the Lovat Estate, housed in the estate offices in Beauly, Highland, started early in 2017 when Roland Spencer-Jones approached the office manager, Iain Shepherd, to see if he could look at one of their maps. It soon became apparent that there were lots of maps, the archive being extensive but only partially known. Consequently, Roland embarked on a full cataloguing of the m 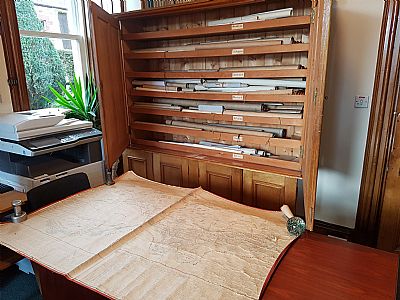 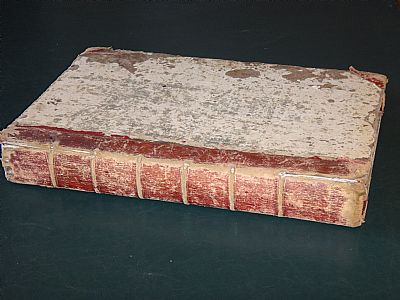 George Brown. Some of these maps were well known to the estate, some hadn't been looked at for decades. The list included 5 precious maps by Peter May, appointed by the Commissioners of the Forfeited Estates to survey the Lovat Estate in 1756. The majority of the maps were made in the 19th century. They varied in size, condition, detail and relevance. Some had been used in dispositions. 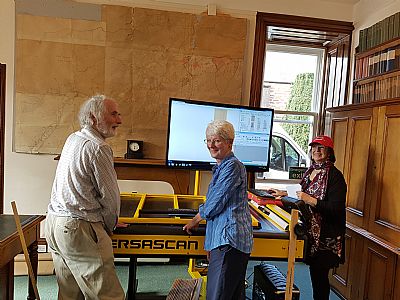 There had always been an aspiration to digitise the maps, and then upload them to the website of the National Library of Scotland, similar to the Dumfries Archival Map Project (DAMP)  However, this suddenly became a possibility in early 2018 as the estate considered moving offices. The maps were taking up space, and could alternatively be deposited in the Highland Archive. However, a digital copy of the maps on the office computers would mean they could still be easily consulted, even if the originals were in Inverness, 13 miles away.

So, a decision was made to hire an A0 flat-bed Versascan scanner from GenusIT in England and to scan the entire map 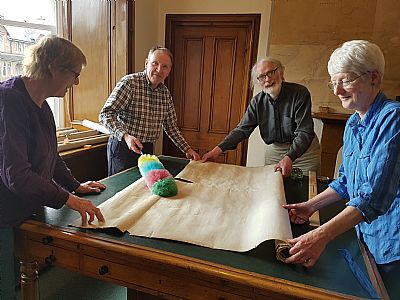 archive. The labour to do this would be provided by NOSAS members. During a very focussed and energetic week in April all the maps were processed in what can only be called a production line. A small team of people worked hard to process each map – locate it, unroll it, dust and clean it, check it against the list, pass it to the scanning team who laid it on the flat-bed, while the scanner operator controlled the scanning process on a computer. The resultant TIFF files were then stored, and backed up at the end of each day.

At the end of the week, we had scanned over 400 maps plus the 136 pages in the George Brown book, plus 17 maps from other estates. This generated >200GB of data, including 900 TIFF images, many of which individually exceeded 500MB each. 57 maps were too large to be scanned in one go, even on the 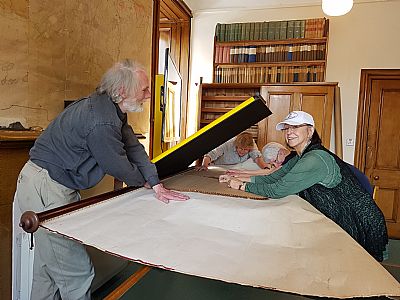 0.8m x 1.2m flat-bed surface. They were scanned in parts. One huge map required seven scans. The images were then processed (including rotating, stitching together, converting into JPEGs) and transferred to the National Library of Scotland where they are progressively appearing on their website.

This project would not have happened without the support and encouragement of :