The 2008-11 project has been completed and the report is on the past projects page of this website.

Discussion
Many ideas and theories have been put forward as to the position of the heat source and the nature of the drying process. Two are outlined here and both have drawbacks.

It is well documented that corn drying kilns were used for malting when distilling was a cottage industry and before the development of the malt kilns that we know today (as at Dallas Dhu distillery). “Our” kiln seems to be somewhere in between - a transitionary stage of malt kiln? a fore-runner of the malt kilns?

The excavation and consolidation of the kiln was completed in early October and the Mulchaich site was informally opened for visitors at the Highland Archaeology Festival Conference with the production and distribution of the Mulchaich distillery leaflet. The leaflet has a brief description of the site and invites people to find out more by visiting it and scanning a QR code which is linked to our website page

A full report on the excavation will appear in due course. Investigation of the site however is not finished yet and will be ongoing for some time!

We are very grateful to Morris Dalgetty and his family for their co-operation and interest, also the neighbours and the Ferintosh Free Church for use of their car park. Also many thanks to the Adopt a 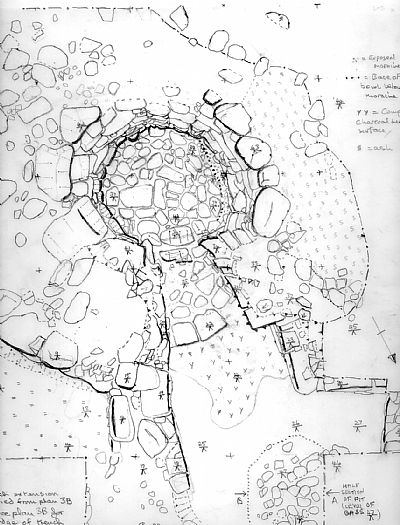 Monument team for their help.

Photos, from the top

1. The flue post excavation with the pit in the foreground

2. The kiln consolidated, returfed and ready for visitors

4. The hearth with the reddened and fire cracked walls of the flue 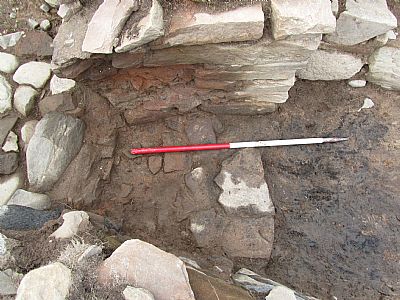 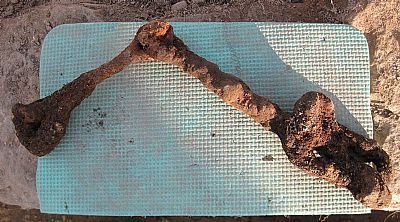 Mulchaich Kiln 6th September 2013
Eight members and one guest turned out on a fine day for what we thought would be the last bit of our exploration of the kiln at Mulchaich. It seems it wasn't the last day. But we were not disappointed! 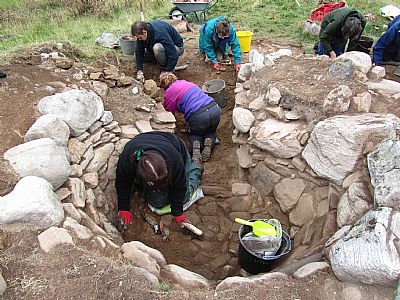 There were several highlights to the day;

So we need to go back for a further day, after which there will  be the plan drawing to do and the returfing.
Meryl

Mulchaich Update
A good day was had on Fri 16th Aug, we were fortunate with the weather and achieved quite a lot but as usual we/I was over ambitious and we didnt get the work completed.
14 members turned up. Two, John and Allan, lopped the overhanging branches from above the fence in order to make the route for visitors easier to follow and in preparation for refurbishment of the fence.
And 12 set to work cleaning down the bowl of the kiln, both inside and outside. The tumbled boulders were replaced in the face of the bowl and the flue of the kiln was located - unusually it was in the centre of the wall dividing the bowl from the barn. 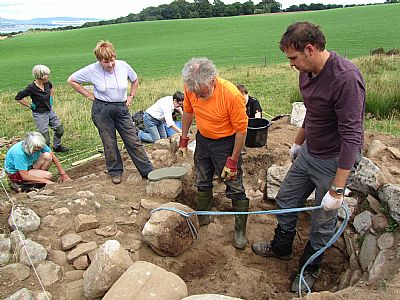 We had a visit from NOSAS member Jim Bone who, later in the afternoon, flew over and tipped his wing at us, encouraging us on! Sadly Jims pictures are a bit fuzzy
There is still quite a bit more to be done at the site - the flue is choked with debris which needs carefully clearing and the firepit is yet to be located. Other tasks include further clearing out of the bowl itself, looking for evidence of a possible platform around the bowl and locating the line of the east part of the dividing wall between the bowl and the barn.
We have left the site open and it is easy enough to go back – next work party is planned for Friday 30th August. After that we will be plan drawing the feature, doing further consolidation work and returfing it 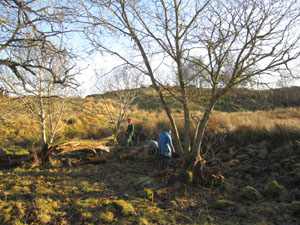 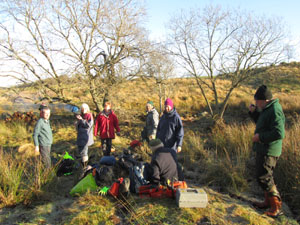 The project to prepare the distillery and the chambered cairn at Mulchaich for visits from the public and to present it under the Adopt-a-Monument scheme is now in full swing. On Saturday 1st Dec we had a successful work party, although, as usual, we were over ambitious and failed to achieve all our objectives! Thirteen people turned up to help on a cold but bright sunny day. Broadly speaking we had two aims, to investigate the bog which we thought might originally have been a pond used to provide water for the distillation process and to clean out the bowl of the kiln, so we split into 2 groups and set to work.

We thought that the pond, which is supplied by a well, might have had a dam holding the water back so the first task was to remove the coppiced willow stools that had split off and fallen onto what we were speculating was once the dam of now tumbled stones – the result of this action was inconclusive! So next the overgrown rushes were cut down as close to the stones as possible – again inconclusive! but it did display the change in slope to better advantage; the upper part of the bog, which had a “suspicious looking” change of vegetation, seemed to be on a more gentle sloping platform.

Meanwhile the “kiln bowl team” were getting to grips with removal of the fill in the bowl and it wasn’t long before the nice stonework of the internal face began to appear. The bowl itself was much smaller than we had anticipated and working in it was a bit cramped so we took turns. Lunchtime came as a welcome break!

On a previous visit we had probed the bottom of the upper part of the bog (“supposed pond”) and it seemed to “bottom out” on a firm surface - was this natural or manmade? We needed to investigate. In the afternoon a grid was put over the bog/pond and both surface levels and depth levels were taken – not a nice job! the feet soon got cold when standing in wellie boots in freezing cold water. However it produced rewards! we were surprised to discover that the readings for the firm surface under the pond were shallower at the lower end and this coincided with the change in slope of the bog; we interpreted this as a dam of material as yet to be determined.

The kiln team made good progress on the bowl in the afternoon but failed to complete the work and packed up at about 3.30pm as the day got colder and the light began to go. We plan to return in the New Year to get to the bottom of it, to find the flue exit and also to expose the front wall and the flue entrance. There are plans too for more investigation of the pond.

A map of the current plan of action can be viewed here.