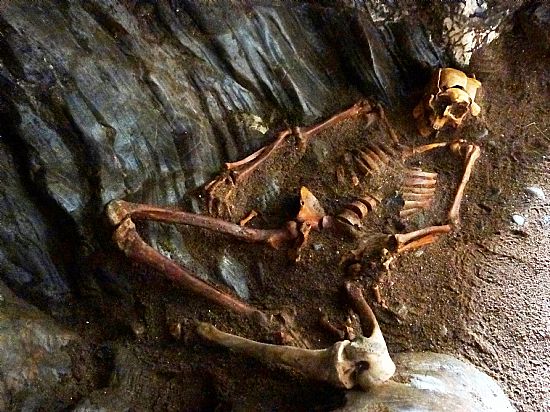 As of June 2018 RCP is an independent organisation. The Project has now run three consecutive seasons of full scale excavations, which included the discovery of the Rosemarkie Man Pictish skeleton in 2016.  Listen to the BBC radio feature here and watch the BBC Landward segment here. 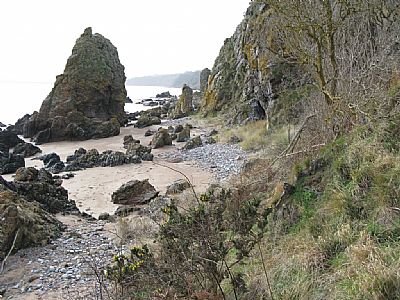 was set up to research the archaeology of the caves on the Moray Firth coast near Rosemarkie. A pilot dig was carried out at one of the larger caves below Learnie in 2006 when evidence was found of occupation and leatherwork in the 19th century, probably by summer travelers. In 2010 Cairds’ Cave was excavated. This cave is the closest to Rosemarkie, and was traditionally said to be the site of Dr William MacLean’s excavations 100 years ago. The dig established that the cave had been excavated before, probably by Dr MacLean. Analysis of bone and charcoal indicated that the cave was in use as far back as the Iron Age.

Photos: Top Right: Rosemarkie Man. Right: Stacks on the beach, with Sea Cave near the shore.  Below The Through and Through Cave 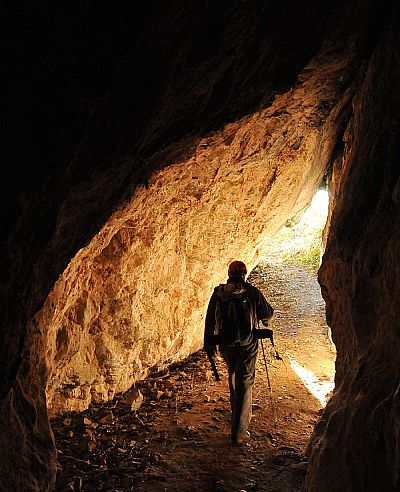 There are 19 caves on this stretch of coastline, they have been high and dry for over 4000 years and apart from interest by RCP and Dr MacLean, their archaeological potential has never been explored. The caves have now been surveyed and during 2012-13 the RCP members dug test pits in several of them and sent away bone and charcoal samples from the deepest pits, which went to the Scottish Universities Environmental Research Centre (SUERC) for carbon dating. The purpose was to ascertain in which periods the caves were used and to find out, if possible, the earliest occupation.

The historic periods found in the results have been varied. In 2006, Learnie 2B finds indicated that the cave had been used by travelers in the 19th century (similar finds were made at Ivy Cave), while the 2010 excavation of Cairds' Cave showed that the cave had been used from the Iron Age, c. 300 BC through to Pictish times, 600-700 AD. The recent test pit results from four of the caves at Learnie were similar. The samples were taken from, typically, a depth of 1 to 1.4 metres and gave results of 600-900 AD in three of the caves, while Learnie 3C had an earlier date of 200 AD. In addition to the results from these samples, 3 pieces of medieval pottery were found in an ash deposit in Learnie 2B. 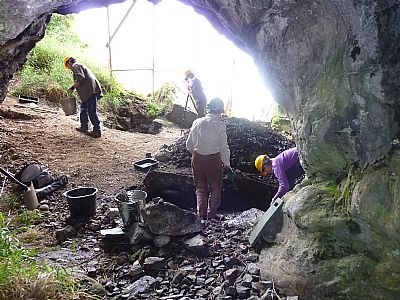 The RCP's investigations have begun to hint at domestic use of the caves from the Iron Age through to Pictish times before the arrival of the Vikings with some re-use in the later Medieval period. In more modern times it seems that (gypsy) travelers used the caves in the 19th and early 20th centuries. 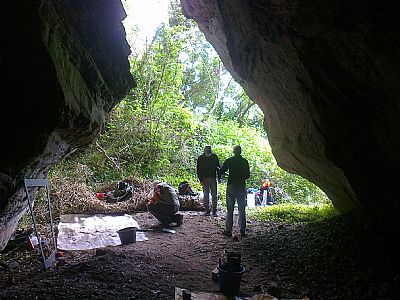 Photos: Above: 2010 excavation of Cairds' Cave.