The case for a genuine road system in Medieval Scotland... still requires to be worked out in detail and it would be especially valuable to have some evidence of when it was at its height and when it began to decline, if decline it did.  (Barrow, G. W. S. 1992, p.209).

Whether by land or water, the ways that people have travelled across the firthlands of Easter Ross are crucial to understanding the history of this area. Many now overgrown or ploughed over routes connect passages to and from ancient features and historic buildings and meet and pass across now long lost burn, river and sea crossings throughout the area.

Since 2008, members of the Roads through Ross Project, a community archaeology venture undertaken by members of the North of Scotland Archaeological Society (NOSAS) have been investigating the remains of these route-ways. They have researched maps, aerial photographs and documents that point to where these early roads, now ploughed out or developed over, might have traversed.

The project’s participants have been successful in interpreting and recording a series of double embanked features that we believe are the remains of a major thoroughfare connecting a network of ancient route-ways in Easter Ross. Perhaps, these may be the very highways of the former Province of Ross. It is proposed that approximately 50 kilometres of main roadway extends from Tarradale on the Beauly Firth all the way to Tain on the Dornoch Firth. We believe that the suggested route continues to coincide with the pilgrimage route, terminating at Tain, home to a significant sanctuary site in the 15th century, but also possibly as far back as the 11th century.

The roadway does not manifest as a single, linear feature, stretching the entire 50 kilometres on the ground.  It is actually seen most clearly in the repeated occurrence of a suite of consistently recognisable characteristics, preserved, for the most part, in areas of woodland.  The likely line of the route is then projected by closely examining historic and current maps and aerial photographs.  Details of the route-way characteristics, and the sites recorded can be found below.

In 2010 Roads through Ross developed collaboration with Archaeology for Communities in the Highlands (ARCH). We have, together, designed, developed and delivered the ‘Pathways into the Past’ programme, inviting people living in seven of the communities through which this main roadway passes to share their knowledge, research and further information on the context o 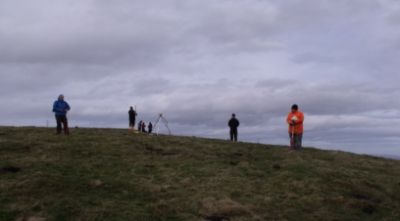 f the route. In this way the route has become the focus for a series of ARCH courses for people of all ages from throughout Easter Ross, enabling them to gain and develop the skills and confidence to become local landscape researchers.  All of the participants have experienced the challenge of getting to grips with the archaeological heritage of their local landscape, piecing together the patchwork of elements that make-up the mosaic of this partially preserved feature, building up and recording the invaluable community research into what we believe is a new monument class of early roadways for the Highlands.

Where the roadway is physically visible, it has been recorded by members of the Roads through Ross Project.  Observing the repeating form and the dimensions of these occasional appearances of double banks, enclosing a made route,  has inspired us to believe that the fragmentary remains represent one very specific design of early road making in the area.

The characteristics of this early Ross road design and construction are:

• A relatively straight main thoroughfare at the centre of a wider network of routes. • A roadway that generally takes a direct route from point to point.
• A roadway that is, for the most part, marked out by parallel turf embankments
• A roadway that, between its double embankments, comprises a levelled surface of between five and eleven meters in width, with no discernible camber.

Double embanked features have been recorded at the following locations:

NH 560092 50752 – A double embanked route-way fragment running ENE – WSW at Spittal Wood, at the junction with the forest path running from Muir of Ord to Inverness.  The embankments comprise stone boulder footings under laid turf, remaining up to 1m in height.  The route-way is stone bottomed and 9 m – 10m in width.

NH 53809 52562 - A double embanked route-way fragment running E – W approximately at Balavil Wood.  The embankments comprise stone boulder footings under laid turf, remaining up to 0.5m in height on the W side, the Eastern embankment is very degraded.  Here again, the route-way is stone bottomed and 9 m – 10m in width.

NH 51441 58917 – Again, a double embanked route-way fragment, 5m in width running N – S at Knockfarrel, to the E of the Hillfort.  The route runs to the E of the zig-zag of a roadway known locally to be the ‘Coffin Road’ connecting Mulbuie to Fodderty, uniting dispersed members of the Strathconon community cleared to Mulbuie and Loch Ussie in the 19th Century.  It runs roughly S – N.

NH 51425 58665 – Possible bridge abutments comprising reveted embanked platforms (2m in width) constructed on either side of the burn that runs WNW – N from Knockfarrel and enabling the continuation of the route-way at this point.

NH 55548 60574 - at Uplands; a double embanked linear occurrence extending W – E.  The N Facing embankment is now preserved as a field boundary.  The line is 7m in width between embankments and the embankments comprise turf laid over stone, reaching 0.5m at highest.  This feature is truncated by a modern road junction to the WSW at Uplands Farm, and may overlay a burn running N – S along the same modern road.

NH 63745 68397 – In the vicinity of Skiach, between Evanton and Alness, here the road is extending WSW – ENE and, again is 7m in width between double embankments.  There is a ditch to the N side of the Northern embankment.  The route-way is truncated here by a relict farm track extending from S – N.

NH 75960 76171 – Here the double embanked route-way extends ENE – WSW, at Brenachie Wood.  The width of the line between the banks here is 6m and the banks - turf over stone in construction - are 0.8m at the highest.

All of these findings have been published to the Highland Historic Environment Record and in Discovery in Excavation in Scotland.
See an extensive bibliography and references here.
This picture and above - Surveying at Cnoc Ravoch 19th March 2011
sitemap | cookie policy | privacy policy | accessibility statement